Location in website: Home » About Us » A Brief History of LFT


A Brief History of LFT

1992 - the Laggan Forestry Initiative (LFI) was formed with the aim of buying the forest, in order to safeguard local jobs, but was unable to raise £1.75 million required

1992 to 1996 - LFI engaged in a number of activities designed to secure its objective of managing the forest (perhaos not buying) and in 1996, The Secretary of State for Scotland, Michael Forsyth, announced his support for Laggan’s project.

1998 - Laggan Forest Trust (LFT) was established with the assistance of Laggan Community Association and Forest Enterprise as “founder members”, with the Laggan Forest Partnership established with Forest Enterprise (FE), enabling the community to play an active part in the management of the Strathmashie Forest. At the same time, a subsidiary trading company of LFT, The Laggan Forest Trust Forestry Company (LFTFC) was created to manage any related forestry and timber sales.

2004 - a 25 year partnership agreement was signed between the Forestry Commission and LFT but crucially Forestry Commission agreed to develop the Laggan Wolftrax mountain biking centre in the forest estate with Base Camp providing a temporary cafe and bike hire facility (until 2012). LFT’s original office was in Laggan Village but when Wolftrax opened moved into a portacabin at the Strathmashie site.

2007-2010 - LFT purchased 3 distinct parcels of land in 2007 within the Strathmashie Forest, comprising a total of 19 hectares, and secured funding assistance from the Scottish Land Fund. In the following 3 years Forestry Commission extended the bike trails.

2011 - 2013 - LFT organised numerous educational activities in the forest, including nature study, music and theatre, with assistance from the Bank of Scotland Foundation to fund volunteers and part-time employees.

2012 - 2014 - a welcome £142k grant request from the Enterprise Growth Fund was coordinated by LFT for overall community benefit and employment – notably to provide support for the fledgling Badenoch Broadband Company, funds to establish a small timber trading and trail maintenance activity, the creation of a wood-fuel business and the provision of “uplift” facilities for the mountain bike trails.

2014 to 2018  - the funding and building of a permanent centre and café facility at Laggan Wolftrax was supported by Cairngorm National Park Authority and Forestry Commission with the building commissioned in Easter 2015. The centre is a lovely, bright airy facility with a cafe providing a range of hot and cold food & drinks and facilities including a learning space for courses and meetings, plus toilets and showers. The LFT office continues in The Centre as well as a bike shop operated by Wee Bike Hub.

2018 onwards - With the Trust modifying its Articles in late 2017 to include support of recreational activities as well as the preservation, protection and management of the forest environment, the trust’s development plan is to cater for and be supportive of Forest Land Scotland’s forestry management and visitor recreational objectives, the Cairngorm National Park’s visitor and recreational objectives, and to support our nearest “heritage neighbour” with SNH at Creag Meagaidh. The mountain bike trails and other way marked trails throughout the Forest estate represent a wonderful experience for all.

This may be a dream opportunity to run your own business in a fantastic location. A separate retail unit (which has operated as a bike hire and rep Full Story... 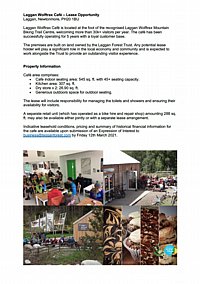 Laggan Forest Trust would like to thank the following organisations for their support:
Awards for All
Leader
The European Agriculture fund for Rural Development. Europe investing in rural areas
Highlands and Islands Enterprise
The Scottish Government
Forestry Commission
Cairngorms National Park Authority
The Highland Council
The Robertson Trust